Traffic Information: Temporary Full Closures of L 3005 due to Cutting of Trees

For safety reasons, Hessen Mobil will cut down some trees in Rheingau-Taunus-County, starting on March 16th, 2020. A number of trees are suffering from a fungal disease, which can also be dangerous to humans. When inhaled, these fungal spores can cause dry cough, fever, and pnemonia. In order to protect the citizens, Hessen Mobil is cutting down ill trees along a number of roads. All works require a full closure and will take place between 9:30 AM and 3:30 PM.

The following road sections of L 3005 will have to be closed off:

Further information can be found on the website of Hessen Mobil.

Due to constructional operations, the access route to Düsseldorfer Straße 36-40 has to be changed once again. 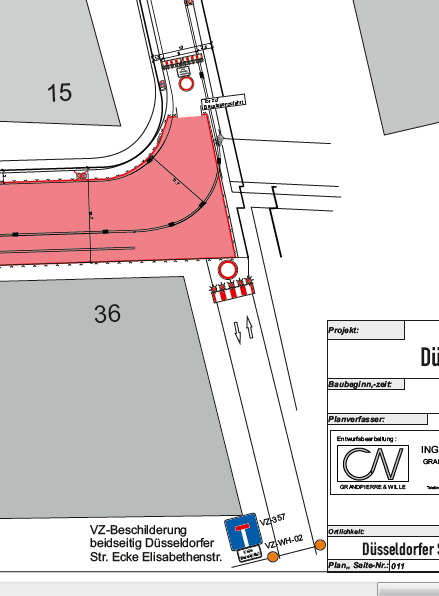 This altered routing will be in place until December 20th, 2019.

Afterwards, Rahmannstraße will be opened again on Januara 13th, 2020 and access to Düsseldorfer Straße will once again be possible via Rahmannstraße. 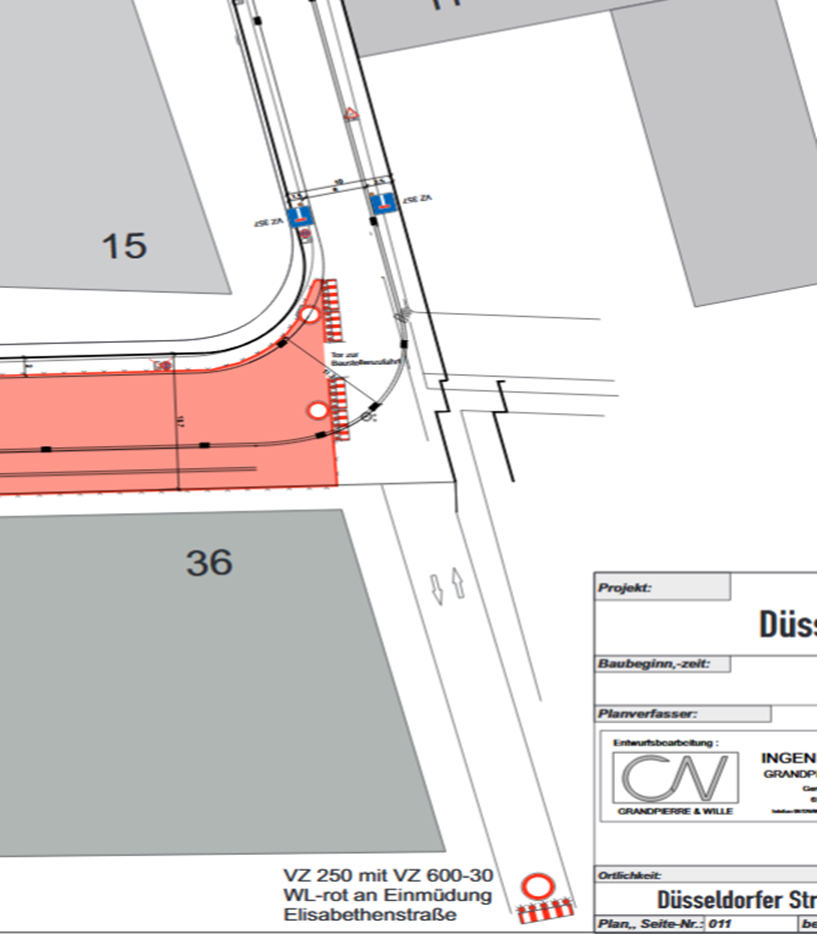 The regulation is adjusted according to the progress of construction. We will keep residents updated. 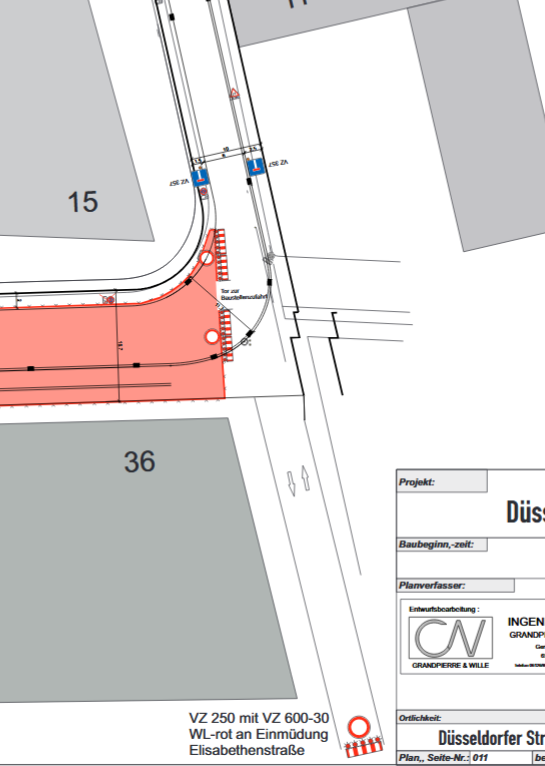 Construction work on the new motorway link between A66 and Düsseldorfer Straße is in full swing. Unfortunately, the construction work can lead to traffic delays in the southern industrial park (“Gewerbegebiet Süd”) at times. The city council asks for your understanding. Road closures can not be avoided. Some may also have wondered about signs warning of warfare agents.

Luckily, there is no reason to worry: the region around Düsseldorfer Straße is an area where anti-aircraft emplacements were positioned during World War II and the discovery of so-called small ammunition must hence be expected. As a result, the excavation must always be monitored by experts. Therefore, the construction site is considered a clearing site, which requires special measures for transport, loading and storage of the excavation. This more complex procedure can result in additional traffic restrictions.

To further ensure safe working conditions, Düsseldorfer Straße has to be closed off completely from house number 13 onwards. This restriction does not apply to pedestrians. Mannheimer Straße becomes a dead end and is closed at the junction with Düsseldorfer Straße.

The road block will become effective on Monday October 28th 2019 and will last for several weeks.

The diversion route is portrayed on the map below:

We kindly ask for your understanding.

Due to the new gas pipeline it is necessary to alter the height of the Telekom pipeline. This leads to a prolonged traffic obstruction until October 31st, 2019.

Pedestrians and cyclist will bypass the construction site via a separate diversion route.

We kindly ask for your understanding and patience.

New Traffic Information for A66 and A64: Motorway Exit coming from Frankfurt will be constricted

Due to construction works on a long distance gas pipeline, the motorway link of A66 / A648 coming from Frankfurt will be narrowed, starting on next Monday (September 30th). The motorway exit is still accessible. Construction works will take place mainly during the autumn holidays and will end no later than Friday, October 18th. The City Council of Eschborn apologizes for any inconveniences that may occur due to the construction works.

Works on the storage sewer and the Hessian water pipe start in Düsseldorfer Straße. Big pipes will be laid with big excavators.

Due to these works, access roads to Becker Technologies and the DeLux parking lot have to be closed off. They can no longer be accessed via Mannheimer Straße and Düsseldorfer Straße. Residents, employees, customers, and suppliers need to use the current diversion route from Frankfurter Straße via Kölner Straße to the provisional access route, then turning right and getting to their destination via the parking lot access. The diversion route will be in place for about 4 weeks, starting on July 30th, 2019. For special transports it is possible to set up a temporary access route. For inquiries please contact Mr Kopp, telephone 06196-490 801 or Mr Milbret, telephone 06196-490 802.

The access routes can be viewed in detail on the following plans: 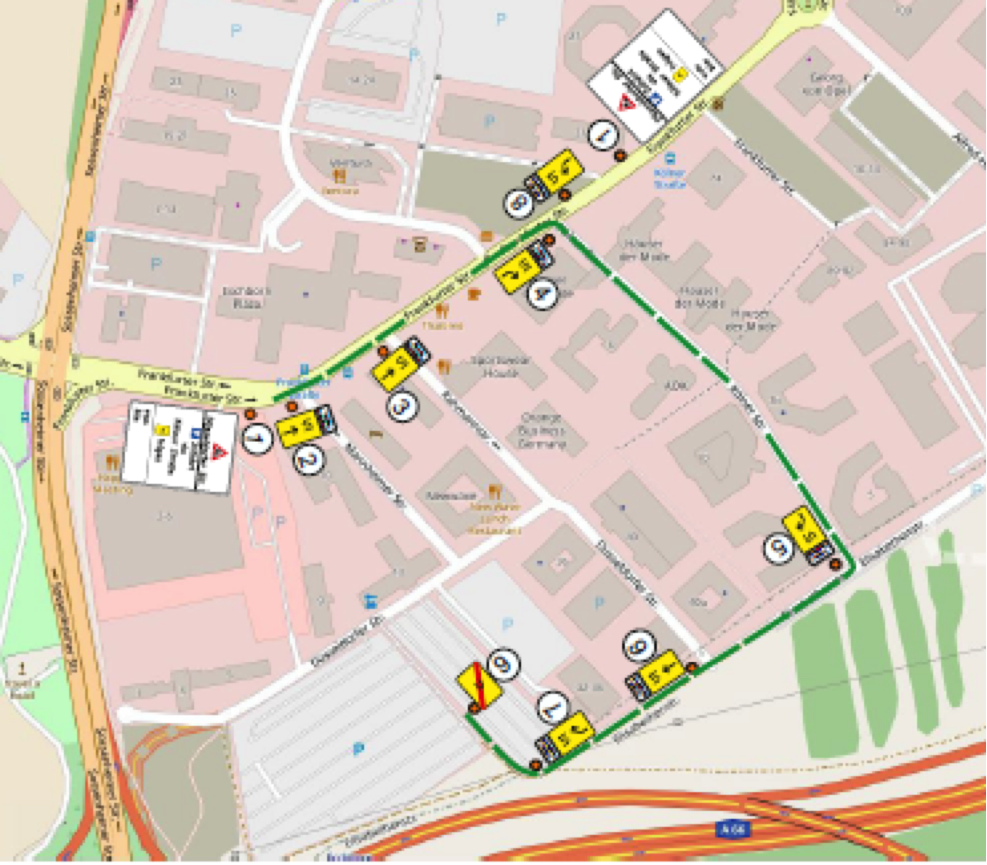 Düsseldorfer Straße, Mannheimer Straße and Rahmannstraße are located in an area where anti-aircraft emplacements were positioned during World War II. No bombs were dropped here, however, there might be some small ammunition left. Some of it has already been discovered. Therefore, all excavation works can only be carried out in the presence of a responsible expert according to German law. If ammunition is found, appropriate measures will be initiated by the person responsible. This ensures safety for both workers and persons outside of the building site.

In order to establish a safe working environment, work had to be interrupted for ca. 2 weeks. As of now, all necessary safety measures have been put into action to continue work safely.

Düsseldorfer Straße will be closed off in the area between Mannheimer Straße and Rahmannstraße for a longer period of time starting on June 13th 2019.  The reasons are works on the municipal water pipeline, the rebuilding of the sewer, the long-distance water pipeline and the municipal storage sewer.

There will be no restrictions for pedestrians and Emergency Services. Pedestrians coming from the station Eschborn Süd can walk along the private road Düsseldorfer Straße 36-40 while the sidewalks are closed off.

As of June 12th 2019, there will be no more obstructions in Frankfurter Straße. During the previous weeks, the closure of one lane will be suspended on some days.

Mannheimer Straße will be asphalted on Saturday, June 8th 2019 and therefore be closed completely. During that time, Rahmannstraße can be driven on in both directions in order to ensure access to Düsseldorfer Straße. On June 11th 2019, road markings will be installed in Mannheimer Staße. There might be obstructions and delays.

On June 12th 2019, Düsseldorfer Straße will be closed off between Rahmannstraße and Mannheimer Straße, turning Rahmannstraße into a dead end. There is no possibility to turn for trucks.

One lane of Frankfurter Straße will remain closed off until June 11th, 2019. The following works need to be carried out at the junction to Mannheimer Straße:

During longer intermissions of construction works at the junction of Mannheimer Straße and Frankfurter Straße, the formerly closed lane will be opened for one or several days and then – if necessary – closed off again. Obstructions and delays in traffic might occur until June 11th, 2019.

We kindly ask for your understanding and patience for the duration of these necessary construction works.

From May 7th until May 10th 2019 there will be repairing works on the traffic lights and asphalting works at the junction of Mannheimer Straße and Frankfurter Straße.

During these days, one lane in the direction of the Fulcrum traffic circle will be closed off. Furthermore, access to properties in Mannheimer Straße might be impaired. The city administration of Eschborn kindly asks for your patience in case of any obstructions or unconveniences.

This will not affect emergency escape routes or the access for rescue vehicles.

On Saturday May 11th 2019 the accesses to the parking lot will be asphalted.

This leads to the following impediments:

Thank you for your understanding.

On May 9th and May 10th 2019 the second half of Mannheimer Straße will be asphalted.

On these two days, one lane of Frankfurter Straße (towards Fulcrum traffic circle) will be closed off for traffic. Impediments are possible when driving to and from properties in Mannheimer Straße. The city administration of Eschborn apologizes for any inconveniences.

There will only be one lane available in Frankfurter Straße from Wednesday, April 24th 2019 until Tuesday, April 30th 2019 in the area of Mannheimer Straße into town (towards the Fulcrum traffic circle). During this time, foundations for the curb and traffic lights will be laid. The city administration of Eschborn kindly asks for your understanding and apologizes for any inconveniences.

On April 3rd, 2019 traffic will be redirected from the Eastern to the Western side, since construction works on this side of the road are complete for now. This does not affect the traffic routing.

Update: The works in Frankfurter Straße will continue for two more weeks. The company Syna will start laying power supply lines earlier than originally planned. Therfore one lane of Frankfurter Straße will continue to be closed off until March 23th, 2019. However, the additional road closures planned for these construction works by Syna at a later time will be omitted.

Due to construction works on the connection of the remodeld Mannheimer Straße and Rahmannstraße and the building of the new link, some deconstruction work is necessary. Therefore, there will be several partial closures of one lane in Frankfurter Straße for a couple of days.

The lane will be closed after rush hour in the morning.

In February, construction begins on the temporary accesses to the large parking lots in Düsseldorfer Straße via Elisabethenstraße and Kölner Straße. The parking spaces will be accessible at all times.  There will be signs telling you how to get to the parking lot. This plan provides you with additional information on the new traffic routing.

In Düsseldorfer Straße construction begins in the end of February. This is important for upholding access traffic for residents while pipes are laid and the street is remodeled. In the beginning of March the laying of the water pipes marks the beginning of pipe laying works.

Construction in Düsseldorfer Straße starting at the turning bay and ending at Mannheimer Straße will be finished by September 2019.

Here's an overview of all important documents to download: